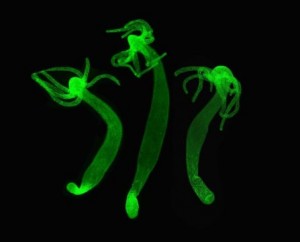 The freshwater polyp Hydra can regenerate all its body from just a fragment, and survives after losing all its nervous system. Scientists from the University of Geneva (UNIGE) have discovered the mechanism of regeneration: overexpression, in epithelial cells, of genes involved in nervous functions. The results have been published in the journal Philosophical Transactions of the Royal Society.

Hydra vulgaris is a 1 cm long freshwater polyp, with tentacles protruding from its mouth, called cnidae, that contain stinging cells or cnidocytes. They have a foot pad to fix themselves to a surface. To move, they just release the grip and are carried away by the sea current. Because of their simplicity, quick reproduction and easy care, they are used as a model organism, especially to study regeneration. Its nervous system regulates contractions, feeding behavior and movement. Strikingly, if Hydra lose all their neurons and the stem cells that give rise to them, they can still survive. Brigitte Galliot and her team wanted to explore the genetic basis of this phenomenon. They studied the gene expression of different parts of the body, either with or without nervous stem cells.

The researchers discovered that, when the nervous stem cells were removed, the expression levels of 25 genes changed in epithelial cells, and some of these genes had neural functions. Normally, epithelial cells do not have any nervous function. But upon loss of the nervous system, they receive signals that trigger the up-regulation of certain genes related to neurogenesis or neurotransmission, and become more sensitive to environmental cues. The team has not discovered yet the mechanism that dictates the epithelial cells to change their genetic program.

Hydra´s capacity to regenerate its the nervous system can help to find a way to treat neurodegenerative diseases. Some of the overexpressed genes have related roles in mammals, like cellular reprogramming or neurogenesis. Besides, the study also can be interpreted as a reverse evolutive process, where epithelial cells might be slow, ancestral neural cells.