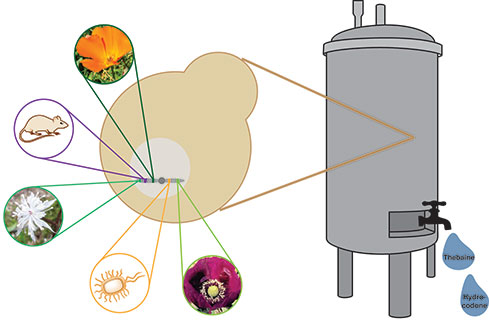 23 genes from 5 organisms were engineering into the genome of baker’s yeast to create 2 strains that convert sugar into thebaine or hydrocodone in 5 days. Organisms used (in circles): California poppy, rat, goldthread, bacteria, and opium poppy. (From: Stephanie Galanie, Smolke Lab)

Scientists from Stanford have modified the genome of the yeast Saccharomyzes cerevisiae to produce the painkiller hydrocodone. The process is cheaper and faster than obtaining the opioids from the plant. The achievement was published in Science.

Opioids are a family of painkillers extracted from the opium poppy. Hydrocodone, oxycodone and morphine are some of the opioids obtained in a process that takes more than a year. The plants are harvested, processed and their active compounds extracted and refined into medicines. The team from Stanford had been experimenting with the baker’s yeast genome for ten years, and eventually managed to make it produce hydrocodone. Although the quantities obtained are still very small, the process takes only between 3 and 5 days.

The anti-malaria drug artemisinin had been successfully produced in yeast by inserting 6 genes in its genome. Producing hydrocodone involved inserting 23 genes from plants, bacteria and rats, the most complex genetic modification in yeast so far. This set of genes is needed to transform sugar into hydrocodone, and to increase the output.

Smolke´s team also obtained a yeast strain that produces thebaine, a precursor to other opioid compounds. Thebaine needs to be refined but eliminates the time-consuming process of growing poppies.

The same procedure could be applied in the future to produce drugs against cancers, infectious diseases and chronic conditions.